The Boys’ Love genre, or BL, has been slowly finding its position within the seasonal anime roster. At its core, BL is just romance between men, and it should offer good homosexual representation in a sea of heterosexual and harem content. However, the BL genre has gotten quite a bad reputation since it often features problematic tropes, so it is actually quite refreshing to watch Sasaki and Miyano this Winter 2022 anime season and see a BL anime that is simply wholesome.

To be sure, there have been some great BL anime in recent years, such as Given, which deals with heavy subjects in a serious manner. Additionally, The Night Beyond the Tricornered Window starts off with a toxic protagonist, but handles the themes with a satisfying conclusion -- though some BL fans might find the romance lacking. While it is still fun to watch light hearted fares such as Junjou Romantica and Gravitation from time to time, it is getting harder to ignore the mountain of problematic depictions over time. 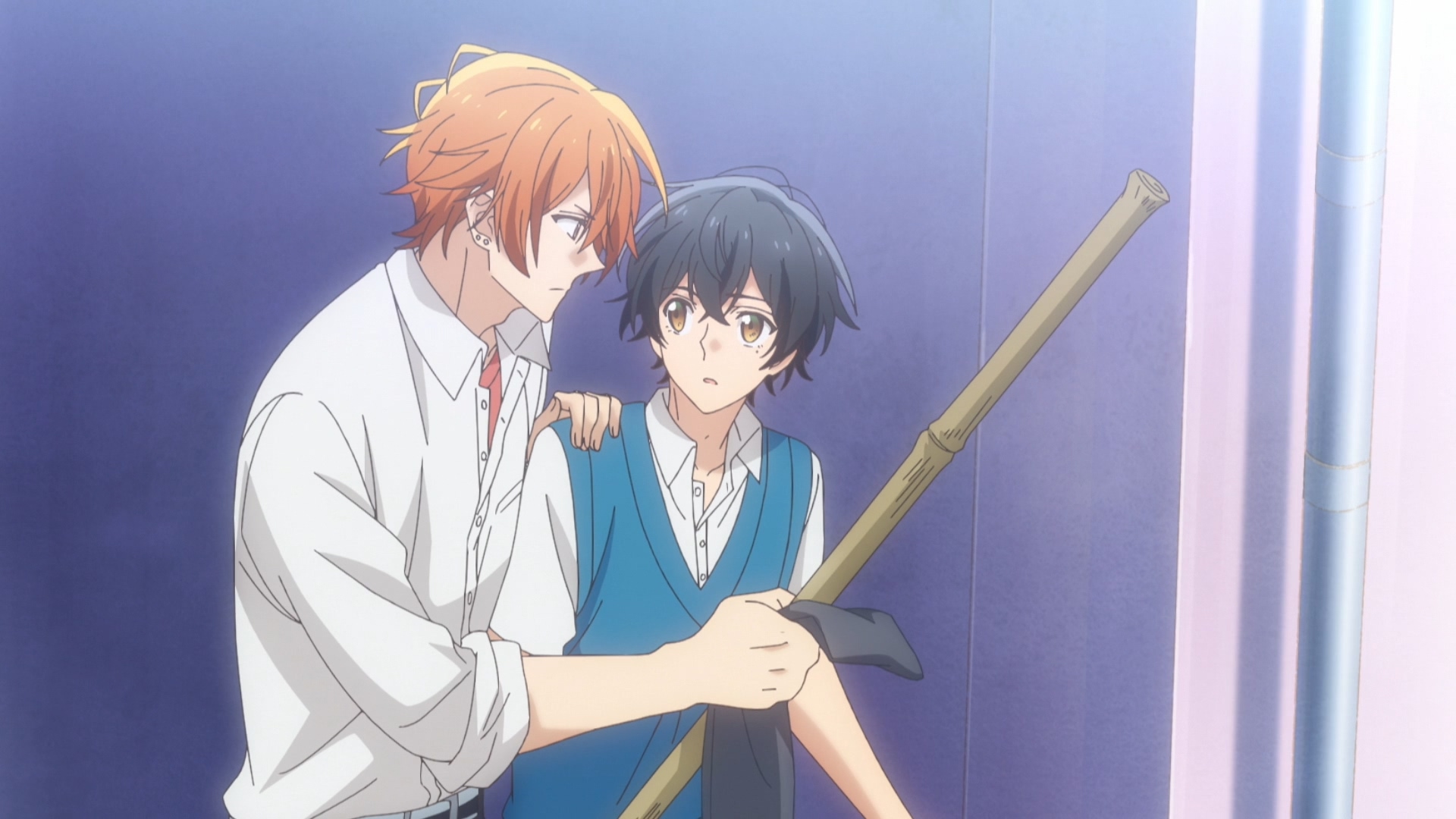 Luckily, Sasaki and Miyano manages to present a healthy romantic relationship, and avoids most of the issues fans have had with traditional BL content, such as forced intimacy and harmfully imbalanced relationships. It is also self-aware enough to get a smile out of any seasoned BL fan.

As the title suggests, Sasaki and Miyano revolves around two high school students, Sasaki Shumei, a second year kendo student, and freshman Miyano Yoshikazu. They meet when Miyano tries to stop some school bullies, and Sasaki comes to the rescue. Sasaki essentially falls for Miyano at first sight, even though he is initially confused at his own feelings for another male. When Sasaki realizes his feelings, he starts to pursue Miyano, who is secretly a fudanshi, or a guy who enjoys consuming BL content.

Admittedly, the series does start off with some old tropes like love at first sight and saving a damsel in distress, but the plot does not linger on these elements. Instead, it focuses on Sasaki and Miyano’s budding relationship. Sasaki wants to first get a better understanding of Miyano, focusing on his interests. From the way he carefully reads Miyano’s BL comic, it is clear that he genuinely cares about what Miyano likes -- and he makes this effort to read the comic so that he can give his thoughts on it; a very respectful way of making a connection.

On the other hand, Miyano is extremely self-conscious and feels a bit ashamed about his interests in the comics since reading BL is often stigmatized, especially for a male. Thus, his reluctance to openly share this hobby is understandable. He even tries to convince Sasaki that he is not gay himself. Though Miyano is not really a loner, having to hide his interests from all his friends is not a healthy habit. This is why Sasaki’s open willingness to accept Miyano is already starting to impact Miyano in a way that’s quite positive.

The depiction of the fudanshi in this series is hilarious yet realistic, from Miyano’s constant shipping of his senpai Hirano Taiga with Hirano’s roommate to his buoyant desire to discuss BL with anyone who would listen. Many fans of BL content, including this series' viewers, can likely relate to Miyano's experiences. Moreover, this depiction is not a caricature and is not just used for comedic effect, but is rather naturally incorporated into building Miyano’s character. 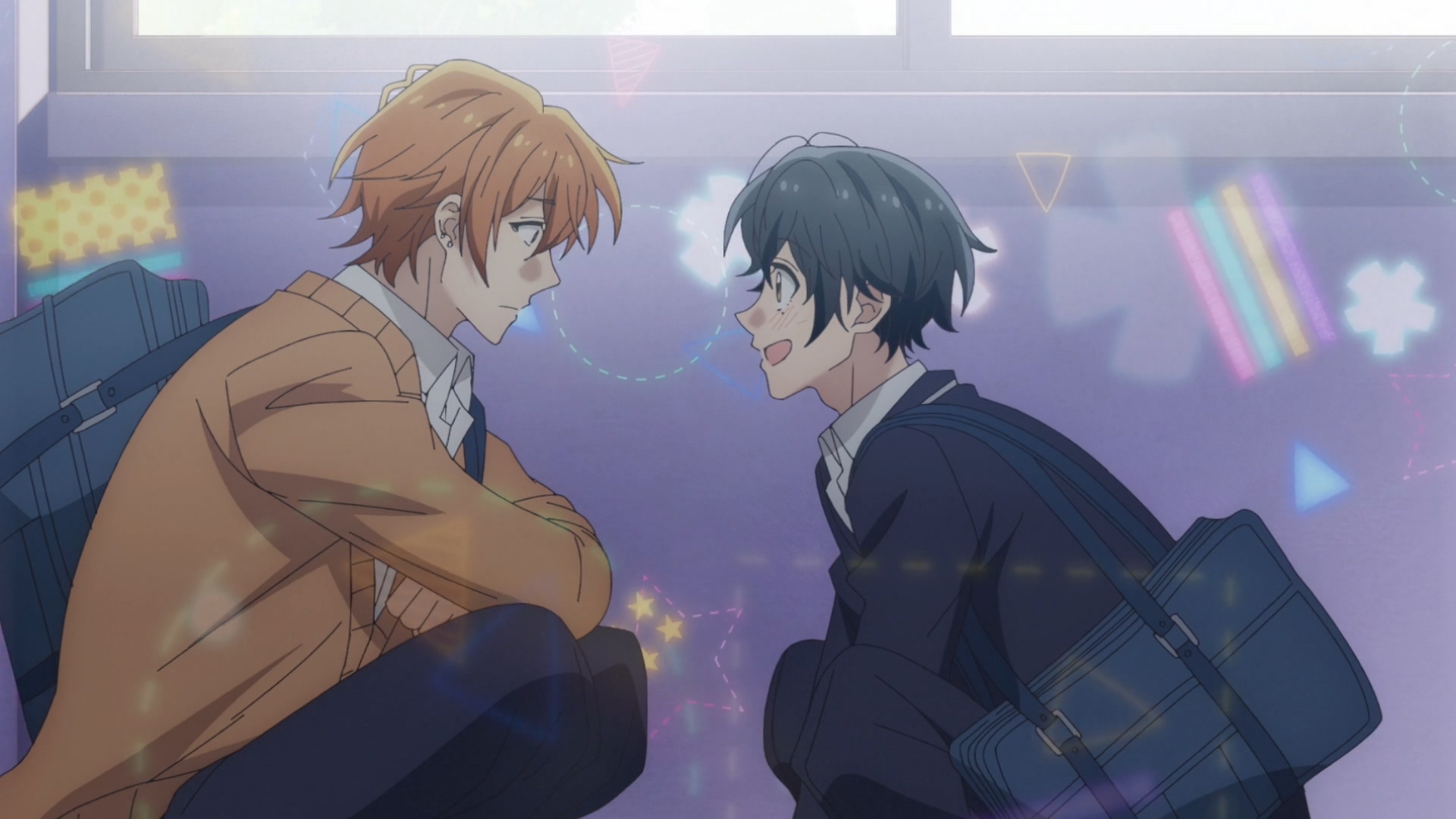 Episode 1 of Sasaki and Miyano already shows some similarities to great romances like Horimiya and Kimi ni Todoke, in the sense that it is a high school romance combined with slice of life that will see the characters grow and mature over time. The romance is pure and wholesome, and the relationship seems to be built on respect and understanding rather than infatuation and lust, which is the sign of a healthy relationship in any genre.